Kidney cancer in the last decade has seen an increase in detection through the finding of small renal masses (SRMs) or tumours with an average increase of 2% to 3% per year. Now almost 40-50% of renal tumours are detected in early stages. Nearly half of these patients are above the age of 60-65. These are often well localised and smaller than 4cm in size.  In a Canadian study nearly 60-70% of the SRMs did not spread to other parts of the body although one third (33-35%) of these tumours had progressed.

This rise in incidence is mainly due to the widespread use of kidney cancer treatment through routine abdominal imaging such as ultrasonography, computed tomography (CT), and magnetic resonance imaging (MRI) for various abdominal conditions (for example abdominal pain from other causes). Although some of these tumours are benign, they are treated like any other malignant tumour although less radically and with minimally invasive techniques. Early detection gives an opportunity to detect kidney disease symptoms early and be able to not only cure an otherwise lethal disease but save the kidney also. The results, therefore, are excellent. 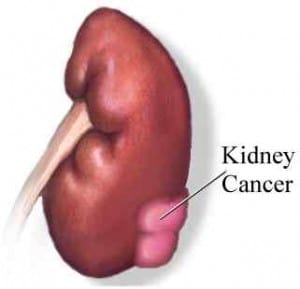 Such tumours are characterised by CT scan if it is already not done. Biopsy (taking small samples of tissue) is done in selected cases particularly when it is difficult to characterise the tumour on the CT scan.

The treatment varies from surveillance (observation) to local excision of tumours. Local excision (partial nephrectomy) is the procedure of choice in most cases. On occasions when it is not possible to save the kidney, radical nephrectomy is done.  In addition, there are minimally invasive treatments such as radio frequency ablation and cryosurgery.

The treatment is centred around Radio frequency ablation (RFA) using high-energy radio waves to heat where the kidney disease is situated.

A thin, needle-like probe is placed through the skin and advanced until the end is in the tumour. Placement of the probe is guided by ultrasound or CT scans. Once it is in place, an electric current is passed through the probe, which heats the tumour and destroys the cancer cells. RFA is usually done as an outpatient procedure, using local (numbing medicine) or general (sleeping) anaesthesia. Major complications are uncommon, but they can include bleeding and damage to the kidneys or other nearby organs.

In cryotherapy extreme cold temperatures are used to destroy the tumour. A hollow probe (needle) is inserted into the tumour either through the skin (percutaneously) or during laparoscopy (key hole) cold gases are passed through the probe, creating an ice ball that destroys the tumour. To be sure the tumour is destroyed without too much damage to nearby tissues, the kidney specialist carefully watches images of the tumour during the procedure (with ultrasound) or measures tissue temperature. The type of anaesthesia used for cryotherapy depends on how the procedure is being done.

Possible side effects include bleeding and damage to the kidneys or other nearby organs.

It is always important to get yourself checked and take precautions. To find out about the treatment of kidney cancer, please feel free to contact us. Or if you want more information, please read our blog.