Structure and Function of Testis and Scrotum 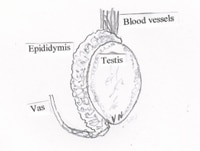 The testes (Figure 1) are two oval organs located between upper thighs in a skin pouch called scrotum. The scrotal skin is wrinkled because of underlying muscle called dartos. Each testicle lies in a fluid filled sac formed by thin membranes that form layers under the scrotal skin. Both testicles develop in the abdomen and then descend to their permanent position in scrotum before birth. The scrotal temperature is about 3-40 C below the inner body temperature. Testis produces the male hormone testosterone (a steroid hormone) and sperm (spermatozoa). Each testis is subdivided into hundreds of coiled tubules known as seminiferous tubules (ST).

Epididymis: The epididymis is just to the side of testis. It is a coiled tube that serves to store and mature and transports sperm between the testis and the vas deferens.

Vas deferens: These are tubes (one on each side) carrying sperm from testes to prostate and run along blood vessels of the testis. 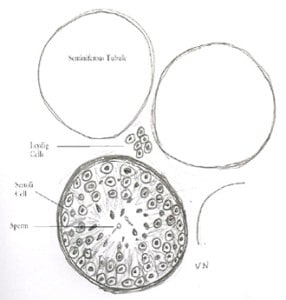 Scrotum: The primary function of scrotum is to provide protection to the testes and help in controlling the temperature inside the sac. The dartos muscle under the scrotal skin helps in movement of the scrotal skin over the testis. It also has hair follicles and sebaceous sweat glands. The sebaceous glands secrete sebum, an oily substance providing a fat layer, to minimize evaporation of water.

Spermatogenesis: Each testis is subdivided into hundreds of coiled tubules known as seminiferous tubules (ST) which are production houses of sperm. Spermatogenesis is essentially an elaborate cell differentiation (transformation) process starting with spermatogonia (germ cell) which lines the ST and ending as a highly specialized motile cell sperm containing only half the number of chromosomes (the other half would come from egg on fertilization). Each tubule is lined with germ cells which progress to become sperm (Figure 2). STs also contain special cells called Sertoli cells (Figure 3) which support the lining of ST and help in maturation of sperm. Sertoli cells are crucial for sperm development. 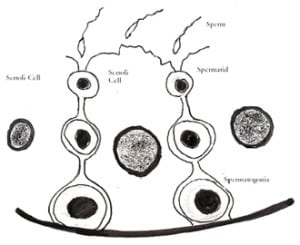 Sperms leave the testis through epididymis into vas which join with the seminal vesicles near prostate, opening ultimately into prostate. The secretions from seminal vesicles and prostate (see below) mix with the sperm to make up the volume of semen during ejaculation.

Seminal vesicles: They are 2 glands at the base of the bladder and connected to the prostate. Like prostate, they provide nutrients for the sperms.

Prostate: It is a walnut sized gland situated below the bladder in front of the rectum and behind the pubic bone. It is closely linked with the urinary system. It secretes much of the liquid portion of the seminal fluid. 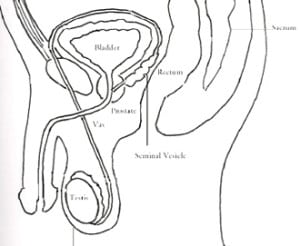 Urethra: It is the tube (duct) that carries urine from the bladder and sperm from the prostate out through the penis.

Urinary bladder: Although urinary bladder is not related to the reproductive system its continuity with urethra makes an important adjacent organ. It is a hollow, muscular and distensible organ above the prostate on the pelvic floor. The urinary bladder is responsible for storage and evacuation of urine. The ureters are two hollow muscular tubes that connect kidney and bladder.

Testosterone and its product Dihydrotestosterone (DHT) are called androgens. Androgens help with sexual differentiation in embryo. The endogenous testosterone (testosterone produced by the testis) is essential for the development and function of the testis, libido, masculinization of bone and muscle mass and sperm production. Androgens also act on other reproductive organs including epididymis, prostate, vas deferens and seminal vesicles. Skin and its appendages (hair follicles, sebaceous glands) also have variable responses to the effects of testosterone. By virtue of its effect on nervous system, testosterone can influence normal well-being of an individual and self confidence. Sexual fantasies, morning erections and frequency of masturbation or sexual intercourse are related to blood testosterone levels. The influence of androgens on red blood cell production is well known. There is a progressive decline in androgen production with aging. This phenomenon is termed as andropause, male climacteric or progressive or partial androgen deficiency of the aging male.